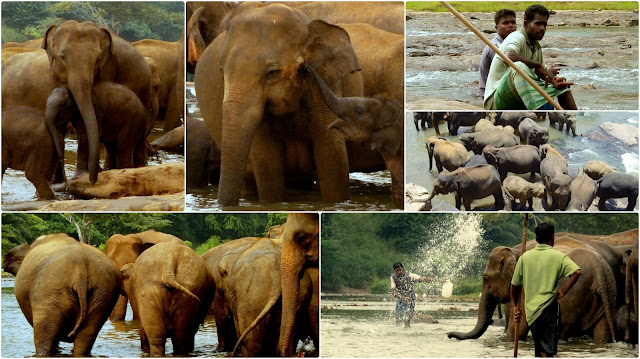 My journey to Pinnawala Elephant Orphanage was on the 26th of Dec 2011. The day started bright and early at around 7 AM. However due to certain delays it was more like 7:45AM by the time we finally left the house. The days journey was to end in Nuwara Eliya which I will cover in one of my next blog updates. In one of my previous posts I described Sri Lanka as being the Land of the Elephants and the Seas of the Blue Whales. Sri Lanka has long been known for its resident jumbo friends! For more information on Elephants in Sri Lanka visit http://www.elephantsinsrilanka.com/index.htm

In this article I talk about Pinnawala, a orphanage set up for our native kinder Jumbos as well as some adult jumbos. Of course you get to see a lot of Olivers here, saying please sir may I have some more! Yes you get to feed the Jumbo kiddies!


I found this video that gives you a very short but to the point introduction about Pinnawala and what its aim is. I need not explain much more as the video tells you all you need to know.


In summary the Orphanage was opened in 1975 by the Sri Lankan department of wildlife. It currently occupies an area of 24 acres, and has the worlds largest herd of captive elephants. Pinnawala cares for many young orphaned elephants as well as acting as a breeding centre for elephants. For those of you who want to read more about the fact and figures I have come across two very good articles on the web please see links below. This first link gives you a lot of detailed information on the Elephant orphanage including a complete history of it. http://www.elephant.se/location2.php?location_id=43

The second link is to a blog of a like minded blogger and travel enthusiast. The editor of the blog has done a great job in putting together what I can say is a great easy to read article on the Orphanage. http://gawaya.com/2010/09/pinnawala-elephant-orphanage-sri-lanka/

Location and Getting to Pinnawala Elephant Orphanage


The below map shows you the location of Pinnawala which is around 90KM from the capital Colombo, and can be done as part of a day trip or as part of your trip to Kandy or else where on the main Colombo Kandy road.

The road trip is relatively painless up until you reach the town of Kegalle, where there can be some serious traffic, as such it is advisable to leave plenty of time to get there. To see the journey from Colombo to the junction at Karandupana which leads off the A1 towards Pinnawala which is approx 5KM on the B199 which leads to Rambukkana (this road is also called the Rambukkana Road).

There are many spice gardens on the road from the main Kandy Colombo road to Pinnawala, that sell many herbal remedies, in fact you are likely to find a remedy for anything (do not quote me there), however do they work or not, that I do not know. As time was of the essence I did not have time to stop at one this time. However I have been to many of these places in the past out of curiosity.

The epicentre of a visit to pinnawala is when the heard of elephants go for their daily paddle and bath in the river, which starts at around 10AM. However the orphanage is open to visitors from around 8:30AM, there is much to see in the actual compound and you can even get a chance to feed the baby elephants, of which there are a few. The below shows the daily time table for the centre. 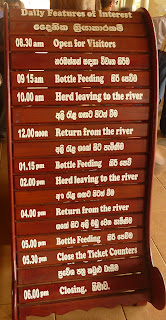 Pictures of the visitor centre shown below. There has been some change done to the orphanage in the past year or so, as I noticed a new administration area, where tourists (local and foreign) can purchase tickets, souvenirs and memorabilia, as well as a cafe and wash rooms. 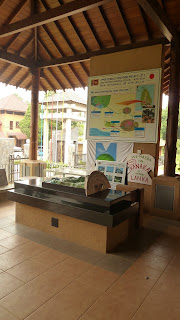 Interestingly enough due to traffic we did not make it to the centre till 11am which gave us a good 30mins to view the elephants enjoying a good paddle in the river, which it self is very picturesque. I managed to shoot the below video of the events between 11:30AM and 12Noon. The two videos shot by me below on two separate occassions capture the elephants in the river and the elephants marching down the street to the enclosure. The two videos are shot from two view points, one which was at closer range (the second video) and one which is from one of the hotels at a higher point, which looks somewhat like a birds eye view.
Video below is the Elephants in the River area

I did not get a chance to go see the actual enclosure this year, however I have visited this in the past, below are a few images of the enclosure and the elephants roaming about freely. The elephants by now are very much used to seeing many thousands of visitors as such they do not get startled or afraid of us tiny humans. That said you must always keep in mind that although there are guards around, and despite the fact that they are captive elephants, these creatures are still the second largest land animal on the planet, and being wild they are very much unpredictable. So as best practice give the animals the respect and space they command, and hopefully all should be well. This all said and done, I have not yet heard of any incidents that involve elephants and humans at pinnawala. 
On the small road from the enclosure area to the river, you find many different souvenir shops, where you can buy all sorts of elephant oriented ornaments, clothing, jewellery, toys, paintings etc. However my favourite place is the Pinnawala Elephant Dung Paper Factory. In my next post I will write all about it. Below are some pictures from the outlet, and what you can potentially buy. Do not let the term poo paper deter you! Think of it as a great green resource where you are doing minimum damage to the environment! Yes karma free paper! No trees, other than those consumed by the gentle giants have been sacrificed to make these paper products. 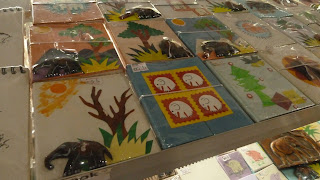 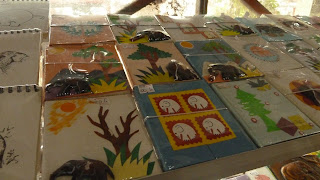 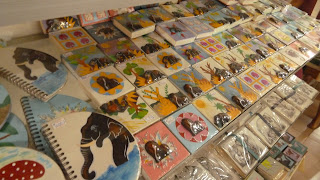