The day started with cleaning up and moving out of my room, in prep for Amy. Followed by a meal with some friends at Coco Veranda in ward place Colombo.

I also had some time to snap some quick pictures of birds and squirrels in the garden this morning. Pictures below.

Coco Veranda seemed like a nice place to chill out, amazingly comfy seating, good all round menu and reasonably priced. more information here http://www.cocoveranda.com/ . I also found a amazing blog on this place, that really does take you through the ins and outs find it here 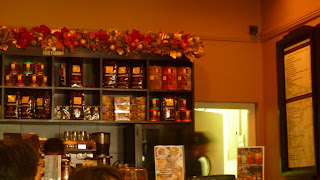 Had a good long catchup with the friends about their plans and generally how life has been over the past year or so.

After enduring 1 hour delay in the flight Amy finally landed in Colombo @ 4:45PM SLST. It was around 5:30PM when we saw her bobbing out of the arrivals into to the concourse.

The delays did not stop, we then had to make our way to my house, which was 34KM from the airport, and we had dinner arranged at a Chinese place in town called peach valley @ 8:00PM.

As today was the last day before the holiday season, everyone was rushing to get home to either travel out of Colombo or generally to do what ever. Hence the traffic on the roads were immense, I have never been stuck in traffic for so long before. The 34 KM took us from 5:30PM till 7:40PM a whopping 2h 10min, where the first 25KM took us around 1h 50min and the remaining 10km took us around 20mins. It was a right disaster, cars, vans, buses, bikes, tuk tuks, coming at me from all angles. Also concious of the time I decided to speed things up as much as I could, which meant some speeding (by which I mean around 50KMPH rather than 5KMPH) when possible, zig zagging,  and the occasional use of the horn to get people to move out of my way.

None the less, after a nail biting ride home, Amy was finally at my place, all in once piece. We then had a 5 min turn around time to start our treck back into the city, where I had to brake really hard as I nearly ran a red light. But we made it to the dinner in the nick of time, in fact 2 mins early. Though I am rather keen on taking pictures this time I completely forgot about it all and went head long into the muchies.

The selection of dishes were not too bad, we had a wide selection of foods, and as Amy found out the food does get spicy even for Chinese food.

Following a rather successful dinner, other than one miss hap, of a toppled soup bowl. Everything went fine.

Finally we went for a tour of the city of Colombo at night, which gave Amy a chance to witness the well decorated city, which in fact was more lit up than London for a change. Way to go SL.

Poor Amy was rather tired by around 10:50PM she started to drift off to sleep. We reached home for around 11:10PM.

The adventure starts tomorrow at 6AM which is wake up time. Set off time is at 7AM. A Sri Lankan Breakfast awaits Amy at 6:40AM. Which is Kiribath, Sambal, and Fish.

With that note I think it is time for me to head to slumberland.... and a good rest before the long 115KM trip into the rainforest begins tomorrow morning.