Posted by Unknown on Saturday, February 18, 2012 in "what to do" Colombo Places to see Places to visit Sri Lanka Things to Do Western Sri Lanka what to do | Comments : 0

In this post I will recommend a few things that I personally enjoy doing in the City of Colombo, both as a local and a yearly tourist. I am still updating this post as there is much more information to be included as you will see below. I intend to add more detail onto each of the sections including images and videos. Please bare with me as I gather all necessary information.

Before I start my narration about Colombo I leave you with this video.

Colombo is located on the western coast of the Island of Sri Lanka. Around 1 hour from the Islands only international airport by car. 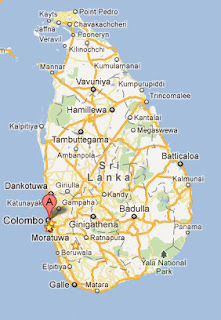 The city is not yet like the other metropolises of Asia, Colombo is but a dot on the map, in comparison to the vast concrete jungles of the great cities of Asia.

The city gains it names from the Portuguese who controlled most of the countries coastal regions in the 1500's. Derived from the Sinhala term "Kolon Tota" which comes from the fact that it is a port on the end of the Keleniya River. Kolon Tota was known as a trading hub for over 2000 years to other great civilisations such as the Greeks, Romans, Indians, and Chinese. It was a major port for the Arab traders who controlled most of the trade between ancient Sri Lanka and the rest of the world, as such many of them settled down to live in this area.

Colombo in the past was known for its bomb blasts, and tight security, a place where you would want to avoid, and this is exactly what three decades of civil war had done to the capital. With peace finally attained in 2009 with the end of the civil war, Colombo is now one of the safest places in South Asia to travel to.

Its war time face is rapidly changing, with virtually no signs of the conflict to be seen in the city. All the security check points, army personnel with big guns are gone, there are however around three police check points in key locations. That all said, one does not feel threatened to walk around in the city as one would have done during the hight of the conflict in the 90's and mid 00's

Colombo has a vibrant and colourful population, and is teeming with life, both human and other forms big and small. It is a very multi cultural, multi ethnic city, where all communities live in harmony. Colombo is full of  Buddhist and Hindu temples, churches, and mosques, this stands testament to the multi faith society whom Colombo is home to.

Colombo is Sri Lankas business capital and it is the largest city in the Island. Home to around 5 million people in its metropolitan area. The city it self, just like the rest of the country, over the past few years is seeing a massive facelift programme being carried out, with new recreational areas, cleaner streets, bigger buildings and generally more entertainment for the masses.

I grew up in Colombo in the 90's and visited Colombo almost every year since 2001, and over the course of time I have grown very fond of the capital, and what it has to offer. One thing you will notice is that it does not have the same mad rush that you see in the great European capitals like London. Life is more laid back, and tropical.


The City is located on the western coastline, meaning if you live in Colombo your not more than 30-40 mins from the beaches, there are some good spots but these are nothing when compared to pristine beaches of the south and east, which are ranked among the best in the world. So Colombo is not really the place for a beach holiday, but if you want to run along the coast or go splash about in the waves then its a ok place.

The beaches are mainly occupied by the local Colombo residents who come out to relax, play sports, exercise and to go splashing about in the waves. Common sights may include joggers, boys playing beach cricket (Sri Lankan are Cricket Mad) and beach rugby, you also see families and children flying kites. Every body gathers to see the sun go down, and this is seen mainly at Galle Face Green, which is the main sea front near the central business district.


Colombo has a few parks and open areas for people to relax and exercise, the biggest of which is the Vihara Maha Devi Park (formally known as Victoria Park), named after the mother of King Dutugamunu.

Colombo being the central hub of business in the country is teaming with shops and shopping centres, that offer a mixture of everything from the more traditional and cultural goods to the exotic and western goods, that said I am confident that you would be surprised if you do not find what you are looking for.

The city has a wide range of restaurants and eateries dotted in all corners. Sri Lankan's love Chinese food, and there is a Chinese restaurant almost every where. Colombo also has many cafes, fine dining restaurants and themed restaurants, which cover a wide variety of cuisines. For the less adventurous, there are also plenty of fast food outlets, pastry shops and local canteens.

Colombo has some spectacular hotels too, with more springing up left right and centre with the Tourism industry experiencing a boom, due to peace and stability in the country after three decades of civil war.

Before I move on to the next section I leave you with these two videos. First of which shows the city at night and some of the upcoming developments of the new look Colombo. The second a blast from the past from colonial Ceylon. Credit goes to the original posters of the videos.

Colombo has many sites to visit depending on what you are really into, below are the key points of interest in the city that should be covered.


The Independence Hall and Square is located in the Cinnamon Gardens area of Colombo, it was built for the commemoration of independence of Sri Lanka from British rule in 1948. The location of the independence Hall is where the formal ceremony marking the start of self rule took place in 1948, which was attended by the then Duke of Gloucester, Prince Henry on the 4th Feb 1948. The hall is made to resemble the Magul Maduwa or the Royal Audience hall in which the Kandyan Convention was signed in 1815 in Kandy. Which made Sri Lanka part of the British Empire.
Below are some pictures of the Hall and Square that I took in Dec 2011.

I also found this flicker album http://www.flickr.com/photos/imagebang/sets/1738895 that had some very good shots of the Square and Hall. Credit for the above link to the original photographer.
Colonial Architecture
Town Hall 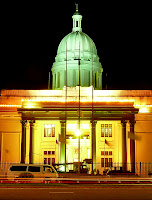 Below is an image I took of the place when I visited in Dec 2011. The renovated building dates back to the 17th Century and was built by the Dutch settlers of Colombo. This wikipedia entry gives you a bit more information on this land mark. http://en.wikipedia.org/wiki/Old_Colombo_Dutch_Hospital

For more pictures of this place please visit, www.flickr.com/photos/vikalpasl/sets/72157628356073237/ , credit goes to the original uploader. Video of  its opening in November 2011 as a shopping and dining facility, the video is from a local news report as such the video is in Sinhala. 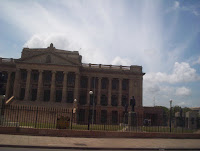 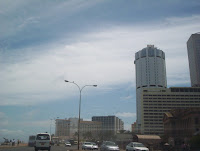 How to get around

You should try the local tuktuks and buses to get a feel of the city, but for those of you who are less adventurous you may want to get taxis, which are widely available. I found this great video on YouTube, created by a Tourist of a tour of Colombo via a Tuk Tuk, locally known as a Trishaw or Three Wheeler or simply taxi.


Places to see nearby

Colombo is within a few hours of many other top destinations, however for those of you who do not wish to wonder out too far from the city, here are a few destinations that are within close proximity and can be considered as day or half day trip destinations

Below area a selection of links that will offer the reader a better understanding of city and what there is to see, including the points of interest that I have mentioned and many more.